Drought characteristics and management in North Africa and the Near East 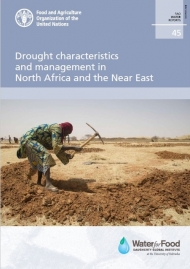 The UN Food and Agriculture Organization (FAO) has called for a fundamental shift in the way drought is perceived and managed in the Near East and North Africa region. The agency said in a new report issued that a more pro-active approach based on the principles of risk reduction is needed to build greater resilience to droughts. Even though drought is a familiar phenomenon in the region, over the past four decades, droughts have become more widespread, prolonged and frequent - likely due to climate change. The region is not only highly prone to drought, but also one of the world's most water-scarce areas, with desert making up three quarters of its territory. The Near East and North Africa's technical, administrative, and financial capacities to deal with drought are inadequate, rendering farmers and herders - the first and worst hit when drought strikes - even more vulnerable.

Drought characteristics and management in North Africa and the Near East.pdf
Tags:
Droughts, Drought Management, Africa