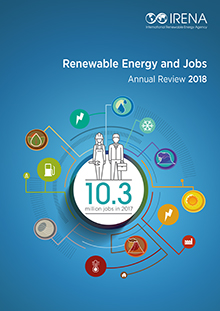 The industry created more than 500 000 new jobs globally in 2017, with the total number of people employed in renewables (including large hydropower) surpassing 10 million for the first time. Renewable Energy and Jobs, presents the status of employment, both by technology and in selected countries, over the past year. Jobs in the sector (including large hydropower) increased 5.3% in 2017, for a total of 10.3 million people employed worldwide, according to this fifth edition in the series. China, Brazil, the United States, India, Germany and Japan have remained the world’s biggest renewable energy employers, representing more than 70% of such jobs. While growing numbers of countries reap socio-economic benefits from renewables, the bulk of manufacturing still takes place in relatively few countries. Four-fifths of all renewable energy jobs in 2017 were in Asia, the report finds.