Report on barriers for solar power development in India 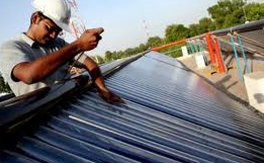 This new World Bank report focuses on problems and barriers that developers are facing in the solar power sector in India. It analyses the risk perception of domestic and international developers and shows how these could be mitigated.

The World Bank initiated a study to understand the barriers faced by solar power developers in India. The main objective of the study is to understand the risk perception of the domestic and international developers/investors (both existing and potential) and how these could be mitigated. A detailed questionnaire was prepared and twenty-five developers were interviewed during the study, which included a mix of domestic and international solar photovoltaic (SPV) and solar thermal players.