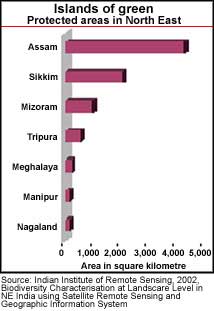 The hills are alive with tradition. One method killsslashes and burnsthe other is healingand sustains. In the northeast hills of India are found medicinal plants that are treasured for their life giving potential. Tribals use these plants to kill pain and treat diseases.

On these hillspeople also practice the age-old method of shift cultivationwhich involves clearing away forests to plant crops. After the nutrients in the soil are exhaustedthey move away to newer forested areas for fertile land. The abandoned farmland needs almost a century to return to its former state. It is this method of cultivation that is solely responsible for the alarming depletion of land resources in northeast India.

For the first time a government sponsored study used space technology like satellite remote sensing and geographic information system for the purpose of bio prospecting and conservation.

This study found that about 0.45 million families in Northeast India annually cultivate 100square kilometres of forests. With the phenomenal increase in human populationthe cycle of shifting or jhum cultivation has decreased from 20-30 years to about 5 years and even up to 3 years in many areas. The total area already affected by this method of cultivation is around 440square kilometres.

The study aimed to create an information base for conservation by mapping land usevegetation coverand biological richness for the long-term maintenance of biodiversity. Bio-diversity is understood as the totality of genesspeciesecosystems and habitats in a region and the amazing web of connections between them. For examplethe seeds that an elephants eatswhich pass through its digestive systemtend to germinate better than ordinary seeds. Thus elephants do their bit to maintain biodiversity.

Known as the bowl of diversityNortheast India comprises the state of Sikkim and the seven sister states of AssamArunachalManipurMeghalayaMizoramNagaland and Tripura. This region has a broad range of ecological habitats from grassy meadows to dense humid evergreen forestdisturbed secondary formations to almost virgin natural forest. Of the 16 major forest types in India13types are observed here. Of the 8000 reported species of flowering plants from the Himalayas5000species are found in this region. These states also boast of 54 ecologically stable formationsout of the 221 identified in other parts of the country.

Sadlyhoweverthe study found that forests here were threatened with uncontrolled degradation and conversion to other forms of land uses. The report states"The tropical vegetation of this regiontypically occurring at elevations of up to 900 meters including the evergreensemi-evergreen and moist deciduous forestsis facing maximum pressure due to human intervention. The evergreen rain forests in the Assam valleythe foothills of the eastern Himalayas and the lower parts of the Naga HillsMeghalayaMizoram and Manipurwhere rainfall exceeds 2300mm per annum have been extensively fragmented.'

The primary cause of this fragmentation is shifting cultivation. Alsohuman pressure on landencroachments on forest landsillicit fellinglopping for fuel wood and fodder and even industrialisation in the form of saw mills and plywood factories have led to deforestation. The absence of a scientific forest management strategy and weak government policies have also contributed to this degradation.

This has resulted in the loss of biological diversitydamage to wild habitatssoil erosion and degradation of watershed areas. Todayover-exploitationhabitat loss and fragmentation are the three threats to the bio-diversity of this region.

Temperate mixed forests possessed higher species diversity value. These forests were least disturbed in many states as they occur at higher altitude usually away from the human interference zone. Other vegetation classespinerhododendronfirhollockhollongbamboosal and teak possessed low diversity. The riverine forests had average species diversity. The jhum lands and degraded forest possessed medium species richness and mostly mixed and cosmopolitan species were observed in these forest vegetation types.

On the positive sidethe report states that the human population density in this region has not yet reached levels that would be detrimental to biodiversity. Howeverpopulation is most likely to increase and cross the level of disturbance threshold. It therefore suggests that to avert this situationit is important to develop alternate sources of livelihood for the local peopleincluding tree-based occupations like horticulture on already degraded forest slopes.

The report also suggests development of corridors between patches of forestwhich would increase species diversity. It also recommends development of ecotones between adjacent communities. The report warns that fragmentation of large patches of natural vegetation must be avoided and isolation of patches should be minimised. An environment rich in biological diversity offers the broadest options for sustaining human welfare.