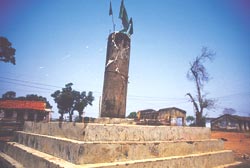 Kunwar Singh Jonko, 34, belongs to the Ho people, a Scheduled Tribe. His village Katamba is deep inside the forest, 60-odd km west of Chaibasa, the headquarters of East Singhbhum district of Jharkhand. In the Forest Department (FD) register, his house, his fields and the entire Katamba village is an encroachment on government-owned forestland. But he has his own story.

He was about 10 years old and it was around 1980. But he remembers when his family moved from near the town of Chakradharpur to Katamba. It was a forest then, and his family and relations cut it down to make it arable. They had come on the invitation of their relative, Dangor Angaria of Sangarjatta village, three kilometres away from Katamba. Angaria had learned from his elders how their ancestors had been driven out of Katamba around 1890, when reserved forest was notified in the region (see box: Origins of injustice).

How did they determine in the dense forest where Katamba was situated more than 80 years ago? The tombstones of their ancestors, called sasandri, lay there. For the Ho tribe, a sasandri is the only document of land ownership. There is another mark for them: there are trees that tribals plant in their sacred groves called sarna, which is an essential feature of a tribal village here just like the sasandri. These trees are not found usually in forests typical of the area.

Jonko's family was a part of the Jungle Andolan (forest campaign) that began in 1978 in what was then the undivided Singhbhum district of Bihar. Hundreds of Ho families decided to get back the land from where their ancestors had been driven out more than 80 years ago. Their way of knowing where their village stood was the same: the tombstones.

The agitation intensified in mid-1978 with incidents against the forest development corporation, which had begun clear felling of mixed forest and planting teak. Several teak nurseries of the corporation were destroyed, resulting in losses of lakhs of rupees. Soon, the protest took the shape of reclaiming ancestral lands. Several political leaders emerged from this andolan, including Devendra Majhi and Shailendra Mahato of the Singhbhum Jungle Mazdoor Union. The agitation became a part of the movement for the creation of the Jharkhand state.

The government responded with police action. There were numerous incidents of police firing and killing agitating tribals. A survey by the Tribal Research and Training Centre, a civil society organisation in Chaibasa, showed that 450 tribal houses were destroyed after getting looted and burnt. Thousands of tribals were charged with cases, very often without any reason. The chief judicial magistrate reported in 1984 that 4,160 cases were pending against about 14,000 tribals in various courts of the district. Police repression led to several cases of human rights abuse. There were reports in the media of how forest officials and timber merchants had connived to cut forests by encouraging the tribals. Once the timber was removed, the tribals were charged with felling. The cutting of forests continued.

Several leaders of the andolan were arrested, including Majhi, who had emerged as the most visible leader of the andolan. Majhi contested the 1979 parliamentary bye-election from a Jharkhand Mukti Morcha (JMM) ticket, but lost to Bagun Sumbrui, the Janata Party candidate who got a lot of support from non-tribals during the elections and had opposed the andolan all along. (Sumbrai is today the speaker of the Jharkhand legislative assembly.) Soon differences cropped up between Majhi and JMM supremo Shibu Soren, and Majhi was expelled. But Majhi went on to contest the legislative assembly elections and became a member of the legislative assembly (MLA).

In 1981, another organisation came to the fore of the andolan: the Kolhan Raksha Sangh (KRS). The thrust of this organisation's argument was that Kolhan was a government estate at the time of India's independence with an administrative set up based on Wilkinson's Rules. They proclaimed that Kolhan had not become independent in 1947 with the rest of India. In 1981, KRS representatives came to Delhi to argue that Kolhan was a republic and its alliance was with the British Commonwealth and the British Crown. They also sent a representation to the United Nations in Geneva. On their return, these leaders faced sedition charges. Other leaders went underground and encouraged the Jungle Andolan's spread eastwards into the famous Saranda forest.

By 1984, the Jungle Andolan had cooled off. A writ petition filed in the Supreme Court by Mathew Areeparmpil, director of the Tribal Research and Training Institute, led to the court putting an end to the police terror. In 1986, the Ranchi bench of the Patna High Court, after hearing a petition by tribals regarding the taking away of their land by the FD ordered the deputy commissioner of Singhbhum to hold an enquiry into the claims of tribals on the land that was under the forest department. No action has been taken on that court order till date.

The tribals who had taken back the land of their ancestors are still cultivating that land, though they complain that the forest department troubles them ceaselessly. Devendra Manjhi was killed in 1994. His wife, Joba Majhi, became a member of the Bihar legislative assembly in 1995. After Jharkhand's creation, she became minister of tourism in the Babulal Marandi cabinet. She made public statements that her condition for joining the cabinet was that the tribals who had taken back their lands should be awarded pattas (title deeds) of that land. The Marandi government fell in March 2003, and Joba Majhi joined the Arjun Munda cabinet, again as tourism minister