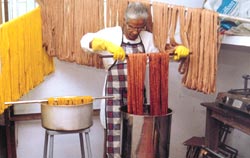 The German ban on the import of Indian textiles containing azo-dyes, said to leech out carcinogenic amines, sent shockwaves through the Indian handloom industry. But this proved to be instrumental in the reinvension of India's ancient knowledge of eco-friendly natural dyes. Mudapathi Balakrishnan, a textile trader in Kannur, Kerala, was not content with this wisdom of adaptation. "If certain dyes can soak into your skin and cause diseases, why not use other dyes that can go in the same way and cure diseases?'

Balakrishnan hails from a family of weavers, and has been trading in handloom cloths for over two decades. The post-ban crunch set him thinking, eventually setting him to work on a proactive product that uses not just natural dyes, but also herbal drugs for its colours. The ban had come at a time when the industry was at an all-time low on account of competition from powerlooms, high wage costs, low productivity etc. "There were both social and technological constraints in increasing productivity. One way out of the situation was to add further value to the handloom cloth, and reposition it in the market as a healthy product,' he says.

Balakrishnan, assisted by his daughter, a student of Ayurveda, has been experimenting on dyeing cotton yarn with decoctions made from various herbs. He has succeeded in obtaining a range of fast colours from several common medicinal herbs. Neem leaves and turmeric, well known for their antiseptic properties, give him shades of brown and yellow. He uses tree turmeric (Coscinium fenestratum), red sandalwood (Pterocarpus santalinus) or henna (Lawsonia inerrmis) for obtaining red, and Indian madder (Rubia cordifolia) for red and scarlet. "It's the medicinal property of the cloth, rather than colour, that I count on,' he says.

"In ayurveda, any substance is known to have five different gunas (properties). It is true that ayurveda focuses on the curative properties of herbs; but this does not rule out other uses,' says T S Murali of the research and development wing, Kottakkal Arya Vaidyasala. "True indigo (Indigofera tinctoria), known for its use in cotton dyeing, also has several healthcare applications. It is said to guard against hydrophobia, asthma, whooping cough, palpitation and certain disorders of the kidney, lungs and nervous system,' asserts A Diraruddin, independent researcher on indigenous science.

So far, Balakrishnan has extracted colours from about 15 herbs commonly used for treating skin ailments, breathing difficulties and sleep disorders. "One needs advanced research support to make cloths that could treat or contain other diseases,' he says.

"Balakrishnan's claims sound reasonable, but need to be verified through scientific studies,' says R B Nair, biochemist at the Central Research Institute for Ayurveda and Sidhha at Cheruthuruthy, Kerala. "Protocols can be designed for testing the cloth on patients and comparing the results with control groups.' Acting on a suggestion mooted by Raghuvansh Prasad Singh, member of parliament, the institute has forwarded a proposal to the authorities in Delhi, recommending clinical trials on Balakrishnan's innovation.

Although there are textile manufacturers who use only natural dyes, they look upon these dyes as a substitute for synthetic dyes. "Natural dyes are, in fact, poor substitutes for synthetic colours, in terms of range, tonal variations and colour fastness,' says Balakrishnan. He believes that a manufacturer of herbal cloth can negotiate better prices than a person who uses natural dyes.