Clogged up in Delhi 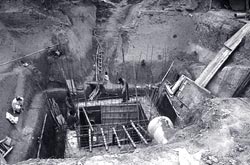 More than two years ago, the Union ministry of urban development and poverty alleviation (moud) issued a notification making wastewater recycling compulsory in Delhi. But the rules have not been enforced to date, with the capital's implementing agencies simply washing their hands of the job.

According to the notification dated July 28, 2001, wastewater recycling is mandatory for all buildings discharging 10,000 litres or more of effluents, and the treated water should be used for horticultural purposes. The ministry has categorically stated that the notification should be considered in conjunction with the municipal regulations of Delhi. moud official Devendra Kumar Goel explains: "In Delhi, (the rules) are included in the building by-laws. So they have to be complied with.'

Astoundingly, civic bodies such as the Municipal Corporation of Delhi (mcd), New Delhi Municipal Council (ndmc) and Delhi Development Authority (dda) refuse to acknowledge the legal position. "Only rainwater harvesting has been made mandatory,' says a dda official in a matter-of-fact manner. Karamchand, deputy chief architect, ndmc, is equally blas