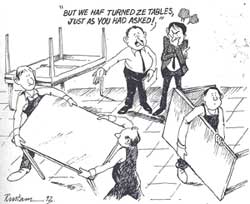 EVEN AS European Community researchers are developing a powerful computerised translation system that promises to break through language barriers, scientists in Japan, Germany and USA are working on a telephone translation system whose implications for world trade are mind-boggling. Both systems are reportedly in the test stage.

The EC project, called Esprit, is being carried out by Bull of France, Siemens of Germany and International Computers Ltd (ICL) of UK. Esprit scientists are using the principle of parallel processing to set up as many as 256 computers to work alongside each other to provide fast and accurate translation of messages sent on personal computers from one part of the world to another.

When operational, the Esprit system will need just 20 minutes to translate 200 pages of text in any of the major languages and this can be speeded up with better programming. The best systems at present would take about eight hours to do the same job. Operating the Esprit system also will cost only about half of what a human translator would charge, says Bill O'Riordan, ICL's manager of research and advanced technology.

The simultaneous telephone translation system that Japanese, German and US scientists are developing, works in a series of stages. First, it interprets the speaker's words using a special device called a voice-recognition system that can register variations in pronunciation. Next, a computer converts the spoken words into a collection of symbols based on both the literal content of the sentence and the speaker's intention. And finally, the computer transforms the symbols into a digital form of the target language and these are again converted, this time by a synthesiser, into audio form for the recipient.

Phone translator systems available today can work with a vocabulary of only 1,500 words, but even so scientists are pointing out the extraordinary implications it has for world trade because it will enable, for example, a Japanese and a Brazilian to converse with each using one's own language.

However, accuracy of translation is a daunting task for computer programmers, because it involves such factors as colloquialisms, idioms and cultural differences. Computer-based translation software available in the market now is plagued by awkward word-for-word translations that can make a shambles, translating "where" as "were" and "vice-captain" as a ringleader of vice. Furthermore, there are words that have several different meanings ( table and chair, table a resolution, show the findings in a table) and words that can be both verb and noun (plan, to plan; hound, to hound), which makes it difficult to parse a sentence. Another problem with Japanese is that there are no spaces between characters, making it hard for the computer to determine where a word ends.