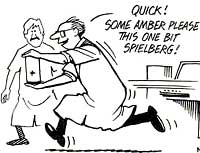 LIFE IMITATES art more than art imitates life, said Oscar Wilde. His statement was borne out recently when US scientists re-enacted in their laboratory the plot of Steven Spielberg's latest film, Jurassic Park, which shows dinosaurs being re-created from their DNA, procured from the blood sucked by mosquitoes and preserved in amber -- fossilised tree resin -- for more than 100 million years.

On the eve of the film's premiere in the US, a team of US researchers claimed to have isolated insect DNA from a weevil trapped in amber 120 million years ago, about the time when dinosaurs roamed the earth. The team includes George Pionar of the University of California, Berkeley, who was a scientific adviser to the film's production unit.