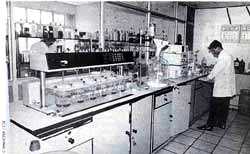 CAPITALISING on more than 100 years of expertise in plant product chemistry, Dabur, one of India's largest Ayurvedic formulation manufacturers, has now ventured into modern pharmaceutical research and product development. Dabur recently announced that it had perfected a method to extract taxol -- a potent drug used to treat ovarian and breast cancers -- from the leaves of the Himalayan yew (Taxus baccata).

Says Anand Burman, director of research and development at Dabur, "We cannot compete with the big players in the synthetic pharmaceutical business, so we are limiting our efforts to what we know best -- natural plant products and extracts."

Though discovered in the early 1960s, taxol was cleared for use in the US only in January 1993 after evaluating the side-effects of the extract and the solvent used to administer it. Also, extracting taxol is extremely difficult and expensive.

Indigenous success
Taxol was first extracted in minute quantities from the bark of the Pacific yew (Taxus brevifolia), but Dabur succeeded in obtaining it from the leaves of the Himalayan yew. The Dabur drug has been sent for pre-marketing clinical trials to Ganga Ram Hospital in Delhi, the Apollo Cancer Hospital in Madras and the Tata Memorial Hospital in Bombay. Says an excited P S Srinivasan, general manager at Dabur, "For the first time, a drug will be released in the Indian market soon after it has been introduced abroad."

The drug Dabur plans to sell in India will cost about half of what it does abroad because it is cheaper to extract taxol from leaves than bark. Also, higher quantities of taxol can be extracted from leaves. A patient requires about 8 courses of the drug -- a total of about 1.7 gm of taxol -- and according to Burman, this would cost almost Rs 3 lakh abroad.

Dabur has already invested Rs 11.5 crore in the taxol project, of which about Rs 4 crore is in research alone. The Rs 7.5 crore plant set up at Sahibabad has a capacity to produce about 600 gm of taxol a month. They eventually hope to raise production to about 2 kg per month.

Dabur reckons only about 3,000 patients in India will need the drug every year. It plans to export the drug after obtaining a worldwide patent on the extraction process.

Scientists at the Dabur Research Foundation have not only managed to extract taxol, they have also been able to obtain fairly large amounts of a taxol intermediate called baccatin. Converting the baccatin to taxol, using chemicals, has been achieved only at a laboratory scale yet.

Dabur scientists claim that their process of extracting taxol -- using various solvents and sophisticated separation equipment -- from leaves is far less destructive to the tree and the environment than deriving it from the bark. Once the bark is stripped off, the tree usually dries up and dies.

However, the Himachal Pradesh-based Himalaya Nature and Environment Preservation Society has protested against Dabur's exploitation of yew leaves from forests in the state. According to a forestry expert associated with the society, Dabur hired contractors to lop off entire branches of the tree, affecting the health of the slow-growing conifer. Moreover, the society contends the royalty paid to the forest department is meagre and only a little of it reaches the local people.

Dabur claims it is conscious of the need to conserve the yew. It is to initiate a project to identify varieties of yew that have high taxol content and to propagate them using tissue culture techniques. They also plan to set up yew plantations in Uttar Pradesh and Nepal.