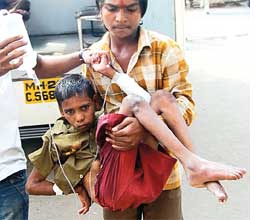 SEVERE malnutrition has claimed the life of a five-year-old boy at a charitable hostel in Jalna in Maharashtra. Four other boys, between five and 11 years of age, are in a serious condition. All the boys are mentally impaired and abandoned by their parents.
Doctors at the civil hospital they were admitted to confirmed that all the five boys had not eaten anything for 10 days.
No one knows where these children belong to, or what their full names are. A few months ago, they were found abandoned at the holy city of Pandharpur in Solapur district. For a couple of months they lived at the Swojal Mentally Retarded Boys Hostel at Barshi in Solapur and on August 13 were shifted to Late Shankarlal Mundada Boy