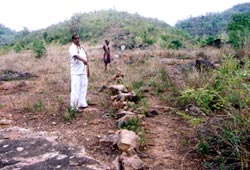 the Orissa government has finally begun disbursing compensation to likely oustees in the lower Suktel dam project. Nineteen families of Magurbeda village in Balangir district have been handed over a rehabilitation package of more than Rs 12.5 lakh. Ironically, the first lot of beneficiaries chosen by the state authorities will be the least affected by the project.

Magurbeda is not one of the villages that will be submerged. The people of this village will, in fact, lose only 23 hectares (ha) of land. This tract is proposed to be used for constructing the offices of the dam project's officials.

When asked to explain the rationale behind this move, special officer Binaya Kumar Gadnaik said: "We are unable to give compensation to the other people because they aren't accepting land acquisition notices. Only those living in Magurbeda fell in line, and hence they received the money.' Gadnaik added that even the people of Magurbeda were extending their cooperation only because they were not being displaced.

The dam issue came to the fore recently following activist Medha Patkar's visit to Dungripali village in Balangir district, where local people had launched an agitation against the project five years ago. Patkar's visit was a part the National Alliance of People's Movement programme.

The lower Suktel dam project was conceived to bring prosperity to the parched Balangir district. According to plans drawn in 1996, the dam will be built to connect the Budalagen and Jharepahad hills that straddle Suktel river. The estimated cost of the project is Rs 217 crore. It is expected to provide irrigation facilities to the district along with 179 cubic metres of drinking water to Balangir town. The reservoir of the dam will cover at least 5216 ha and it will officially lead to the submergence of 26 villages (though unofficial sources put this number at 56).

"Should we be uprooted from our land or should the government reward us for having protected the forest?' asks Ghunu Sahu, president, Lower Suktel Budi Anchal Sangram Parishad, a forum of 30 villages protesting against the project. Not only will the displacement have a bearing on the livelihoods of the people, it would also affect the biodiversity of the region. The area is known for its tendu leaf cultivation and is also rich in non-timber forest produce such as medicinal herbs, chaar, broom grass and mahua.

Environmentalist Arttabandhu Mishra of Sambalpur University is of the opinion that "unless deforestation is checked, Balangir will become a desert in two or three decades'. A report of the Regional Centre for Development Cooperation (rcdc), a Bhubaneswar-based non-governmental organisation, observes that Balangir has lost its forest wealth rapidly. It notes that while officials are claiming to restore the ecological balance in this region through the dam, they are actually going to destroy one of the forested areas of the district.