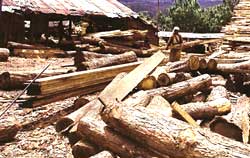 on may 10, the Supreme Court sentenced Maharashtra transport minister Surupsing Hirya Naik and additional chief secretary Ashok Khot to jail terms of one month on charges of violating the court's order and permitting six sawmills in the state. Naik was the state forest minister when the sawmills were granted permission, disregarding the court's 1997 order to close all unlicensed wood-based industries in Maharashtra and Uttar Pradesh.

The incident has triggered a string of actions by the Punjab forest department, which issued closure notices to at least 300 sawmills in the last week of May. Forest officials say the move was to comply with the court's October 2002 order to close all unlicensed wood-based industries across the country. Subsequently, the state also prepared a set of rules for the operation of sawmills and setting up plywood factories. The Central Empowered Committee (cec), which advises the court in forest matters, has already cleared these rules and the state government will soon come out with a notification to streamline the process of issuing licenses to sawmills.

Following the Maharashtra incident, the Haryana forest department too has issued closure notices to 350 wood-based units. These back-to-back events, however, have laid open fissures in the regulation of the country's wood-based industry: some states don't have proper regulations, some do. This means that trade across state borders remains unregulated.

Uphill task The Supreme Court has actually been frowning upon wood-based industries since 1997. Then it had directed that no state government should relax requirements for grant of licences to new sawmills, veneer or plywood factories. Instead, states should come up with rules identifying the number of wood-based industries and the carrying capacity of forests in each state, said the order.

Fearing that the lack of regulation in the wood-based industry would ultimately be disastrous for the forest cover, the court in 2002 further directed a complete shutdown of all unlicensed wood-based industries. No state or Union territory should allow unlicensed wood-based industries, it said. The order also said new units would have to seek prior permission from cec. But cec was not prepared for the onslaught of requests from sawmill owners. It thus decided to clear the process and rules of granting licences in every state, instead of clearing the applications on a case-to-case basis. But in the absence of proper legislation, cec's efforts are meaningless. Sawmill owners in most states are still waiting for licences; the best way for them, perhaps, is to opt for unlicensed sawmills.

Not in parity As of now, a few states like Himachal Pradesh, West Bengal, Rajasthan, Maharashtra, Haryana and Punjab have wood-based industry rules in place; Gujarat is in the process of preparing regulations. "But lack of uniformity in sawmill regulation across states defeats the purpose,' says Ritwick Dutta, an environmental lawyer. "The closure of sawmills in Uttar Pradesh saw a surge of new ones in Punjab and Haryana, and all the raw material was being transported there, leaving the licensed ones in Uttar Pradesh in the lurch.'

In Haryana for instance, the rules for regulating wood-based industry authorise divisional forest officers (dfo) to grant licences to operate or expand installed capacity of any wood-based industry; the application for licences should specify the species of trees to be used in the mills, the quantity and source of timber. But unlike some other states, Haryana and Punjab do not specify any cut-off area from the boundaries of reserved forests. In Maharashtra, no wood-based industry can operate within 8 km of reserved forests, national parks or sanctuaries. The demarcation is the same for Jammu and Kashmir, while Uttar Pradesh mandates permission from dfos if the industry is within 80 km of a reserved forest.

In view of the varying rules for wood-based industries, it is still not certain if the court's purpose is going to be achieved. As of now, the rest of the states are continuing with the seemingly mammoth task of framing sawmill operation rules, as per their own convenience. Parity across state borders is yet to receive any concern.