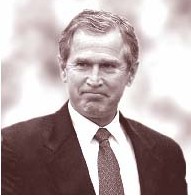 " i oppose the Kyoto Protocol because it exempts 80 per cent of the world, including major population centres such as China and India, from compliance and would cause serious harm to the us economy.' This retrogressive statement made by us President George W Bush in a letter to Republican senators has sparked off a series of horrified reactions from leaders across the world, and from non-governmental organisations for backing off from pre-election promises.

Meanwhile, the Indian government has failed to react to this accusation leveled at the country. These "population centres' which Bush refers to make an insignificant contribution to greenhouse gas emissions, particularly carbon dioxide, since they have extremely low per capita emissions. The us , on the other hand, contributes to one-fourth of the world's total ghg emissions. The total carbon dioxide emissions from one us citizen in 1996 were 19 times the emissions of one Indian. us emissions in total are still more than double those from China. At a time when a large part of India's population does not even have access to electricity, Bush would like this country to stem its