Maharashtra CM for Art of Living to check Vidarbha suicides 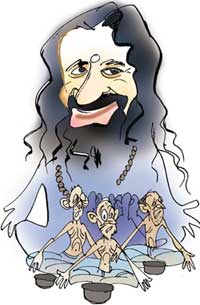 it has been less than two months since prime minister Manmohan Singh visited Vidarbha, Maharashtra's cotton country, with a special package for the beleaguered farmers. Since then 200 more farmers have committed suicide across the 12 districts of the region, 110 in August alone, which is the highest recorded monthly figure since the debt crisis began nine years ago.

Activists put the rising deaths down to official apathy and farmers' despair. Though Singh announced a relief package worth Rs 712 crore, many farmers say help has yet to reach them. On an average, one Vidarbha farmer commits suicide every eight hours. A local ngo Vidarbha Jan Andolan Samiti maintains a record of every suicide and uploads it on a website so that the government can't refuse to accept responsibility.Kishore Tiwari of the samiti says the government has not taken relief measures even though three relief packages were declared in the last eight months.

Maharashtra chief minister Vilasrao Deshmukh says he is clueless why cotton farmers are taking their lives despite the announcement of huge relief packages. He reckons it's a lifestyle problem, leading to psychological imbalances, which must be addressed. So, he got new-age guru Sri Sri Ravi Shankar's