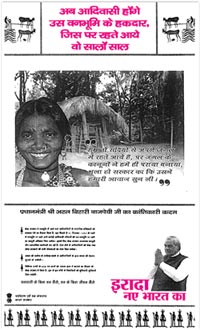 fixated on extending the ‘feel good’ sentiment to the country’s 67.8 million tribals, the powers that be forgot where to draw the line. On February 5, the Union ministry of environment and forests (moef) released a circular stating that the land rights of tribals living in forests since 1993 or earlier would be regularised. Advertisements in the print and electronic media have been portraying the measure as a policy decision. The ministry also unveiled new guidelines, through another circular issued on February 3, to convert forest villages to revenue villages. The catch, however, is that the Supreme Court (sc) had stayed the legalisation of all encroachments on forestland in 2001 itself. And now, in response to a plea by amicus curiae Harish Salve, the apex court has further restrained the government from going ahead with the two schemes.

“How could the Centre publicise such a move when the matter was under the apex court’s consideration? This amounts to contempt of court,” says a lawyer from Chhattisgarh. The Union government is merely trying to “fool the people” ahead of the Lok Sabha elections, he adds. While the ruling Bharatiya Janata Party’s spokesperson, Mukhtar Abbas Naqvi, refused to comment on the sc’s latest order of February 23, he said that the ongoing ad campaign would be stopped forthwith.

Pradeep Prabhu of the Kashtakari Sangathan, a tribal welfare body of Maharashtra, says: “Environment was once more being sought to be sacrificed at the altar of electoral politics.” A closer look at the two circulars bears this out.
Hollow sop The February 5 circular states that tribals who have been in continuous occupation of forestland from December 31, 1993, will be eligible for inclusion in state governments’ forestland diversion proposals that are sent to the Centre for clearance. But the sc had fixed the year 1980 as the eligibility threshold under the Forest (Conservation) Act (fca). “This cut-off date was considered sacrosanct and non-negotiable. The government has tried to relax this too,” laments B D Sharma, ex-commissioner for scheduled tribes and scheduled castes.

“The prime minister wanted to solve the problem once and for all. So the year was changed,” explains V K Bahuguna, inspector general of forests, moef. He asserts that while the pre-1980 cases pertained to forestland encroachment, those included under the new provision would fall in the disputed claims category. According to Bahuguna, the two should not be confused. It may, however, be noted that the sc has not made any such distinction in the matter.

“The government has muddled up the entire issue for electoral gains,” says environmental lawyer Ritwick Dutta. Rajesh R of research organisation Taru raises a pertinent point: “ Bona fide cases would either be in continuous possession of land for much longer, or would have been wrongfully dispossessed of the tracts after they were deemed forestland.”