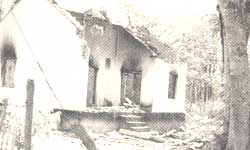 NEARLY eight weeks after the March 14 fire that damaged a portion of the Nagarhole National Park and Reserve Forest -Asia's largest deciduous forest - the debate is on as to what happened on that day and the week thereafter and how much damage was actually done. On that day villagers went on a rampage following the death of Chippa, a small coffee cultivator, allegedly at the hands of range forest officer (RFO) K M Chinnappa, and set fire to a stretch of forest land and wreaked havoc near the forest administration's office at Kutta. In this process, Ulhas Kara-nth, a researcher living opposite the headquarters of the national park, had his house and equipment destroyed.

Initial reports suggested damage over 60,000 hectares (ha) of forest. But on April 2, Karnataka's minister of state for forests Eti Shambunath told the state Assembly that satellite pictures showed that the fire had affected 83,ooo ha of forest - 60,ooo ha in Nagarhole alone. But P M Aianna, honorary chief wildlife warden of the Nagarhole Reserve Forest, said that the satellite pictures revealed "a canopy of fire" spread across several forests. According to M K Appayya, the Karnataka chief wildlife warden, "the total fire damage to Nagarhole NP alone was some 6,000 ha".

On April 5, the Indian Space Research Organisation (ISRO) said images beamed by one remote sensing satellite, IRS-IB, that passed over the sanctuaries on March 15, showed that the fire had damaged only 3,800 ha. Another set of images taken on March 26 by IRS-IA reportedly showed an additional 14,200 ha of the Nagarhole forest burnt since the March 14 incident. IRS pictures show that the Bandipur National Park that adjoins the Nagarhole park had suffered even greater damage due to fire around the same time. Whatever',be the exact extent of damage, one fact that emerges clearly is that forests across Karanataka and Kerala are extensively torched every year, particularly in the dry season. Not only fi)om accidental causes, or for deliberately illegal purposes, but also - in India's tradition of rebellion - in anger.

C H Basappanavar, managing director of the Karnataka Forest Development Corporation Limited (KFDCL), corroborated reports that several fires were started even after the first incident on March 14. In the week following this incident, villagers reportedly torched the forests at different places.

The Bandipur fires had allegedly been lighted by some disgruntled people on February 29 when forest department officers were away in Bangalore for the department's annual sports meet. A couple of days had passed before the fires were discovered.

The controversy over the extent of damage is dimmed by the mystery surrounding the death of Chippa and the unchecked torGhings.

While Kodavas, the people of Kodagu, and the Kodagu Ekikarana Ranga (KER), a "sons-of-the-soil" organisation, allege RFO Chinnappa killed Chippa, the forest department denies it. KER is alleged to have instigated the mob to go on a rampage. Forest officials say the mob could have been controlled but for the police inaction. The police deny this, but do riot have a convincing explanation for their role, or lack of it.

Amid the wide attention that these questions attracted, the underlying major factor has been side- tracked: the population of Kodagu itself - the Kodavas' sense of alienation, starkly evident in a tour of the region, and their resentment against outsiders, particularly the Keralites who have settled in Mercara. Police and forest officials allegedly harass them on the pretext of enforcing anti-poaching and anti-smuggling laws. Though the officials deny any harassment, assistant conservator of forests C A Devaraj volunteered a revealing statement: "Poaching is prohibited in the game sanctuary. Anybody found poaching will be shot dead and that cannot be called harassment."

As for smuggling, KER alleges that sieasoned smugglers get away with their illegal activities by virtue of their political connections. Small coffqe planters, on the other hand, are victimised by the police and forest officials. This is partly corroborated by Aianna who says that foresi officials abet smuggling of timber, and admitted that the forest department's acquisition of Badaga village, for a right-of-way, was enforced despite the villagers' opposition.

After the March 14 incident, the Kutta police rounded up 300 to 400 suspected arsonists, randomly taking into custody people living on the periphery of the forests, including Kallichiah Belliappa in the dead of the night. Kutta circle inspector Dharmiah allegedly insisted Belliappa provide names of 10 'suspects' before freeing him.

Thammu Pooviah of the KER explains that Chippa who has been described as a notorious poacher couldn't have tried to shoot anything more than a wild boar or a rabbit. "Killing a man just for that is unjustified," he asserts. The Kodavas deeply resent what is seen as the arrogance of forest officials, and allege that the latter are as corrupt as "high-handed". Such behaviour is evidenced by acts such as digging elephant trenclies in the middle of the planters' estates for "no evident reason", and lack of action when wild animals stray out of the jungles and prey on domesticated cattle and animals. Charges of corruption abound. One RFO allegedly was reponsible for felling of trees over a 30-acre area inside Nagarhole. A case was booked against him, but conveniently "postponed", subsequently "forgotten". KER firmly believes that RFO Chinnappa was responsible for Chippa's death. "The arrogance of the RFO led to the incident," says Mathanda Monappa, KER president. The ire vented on March 14 is mainly due to resentment against Chinnappa, who allegedly has a track record of arrogance. At another level, the Kodavas also resent their neglect by the state government. Very poor lev- els of infrastructural facilities have added to their woes."Though Kodagu district is the highest tax earner for the state (Rs 400 crore) we get a paltry Rs 34 crore for our development," says M M Ayappa, a KER leader.

The people of Kodagu have no sense of alienation towards the natural heritage they control. They maintain Devara Kadus or sacred groves which are well tended and protected; felling of trees in these woods is considered a sacrilege. In fact, "KER is pleading for the case of Devara Kadus to be made a reserve forest," says Pooviah.

A positive development is the regeneration of the burnt areas. Aianna claims that reptiles, and nesting birds suffered most among wildlife. Officials debate the time for the-forest to revive. But optimists hold it may not be long.