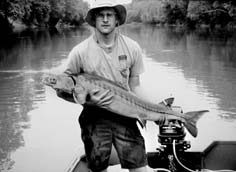 the sturgeon population is fast declining due to poaching, illegal trade, habitat loss, dam constructions, pollution, damaging aquaculture practices, lack of regional cooperation in conservation programmes and poor law enforcement. This was revealed during a recent international meeting of more than 40 experts, including scientists, representatives of government and non-governmental organisations and caviar traders from 11 countries. They identified priority areas for sturgeon conservation and formulated recommendations for action. As sturgeons are migratory fish that regularly cross international borders, global cooperation is critical for any conservation attempts to succeed, they opined. About half of the 27 sturgeon species have a high commercial value in international markets for caviar and meat. The condition of the sturgeons, particularly in the Caspian Sea, Azov Sea, Amur River and Yangtze River, was highlighted during the meeting. "A few major steps that can be taken to protect the sturgeons include development and implementation of regional trade and law enforcement agreements,' said Mohammed Pourkazemi, chairperson of the World Conservation Union's sturgeon specialist group.