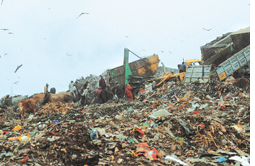 On May 16, 2007, in a temporary relief, the Supreme Court permitted the Union ministry of new and renewable energy (mnre) to subsidise five pilot waste-to-energy plants. The ministry is taking this as an approval for all waste-to-energy technologies, while experts advise caution.

The court had, on May 6, 2005, prohibited the government to sanction any further subsidies to such plants. The decision had come up in the Almitra Patel v Union of India case. The Court had then noted that a bio-methanation based waste-to-energy plant at Lucknow had not lived up to its promise and had ordered the government to constitute a committee comprising experts, including those from the non-government sector, to inspect the Lucknow plant's record. A 14-member body was constituted with D K Biswas, former head of the Central Pollution Control Board, as its chair. Questions were raised about the composition of the committee.The committee submitted its final report in December 2005.
The verdict The Supreme Court has permitted "the ministry of non-conventional energy sources (mnes) to go ahead for the time being with 5 pilot projects chosen by them, keeping in view the recommendations