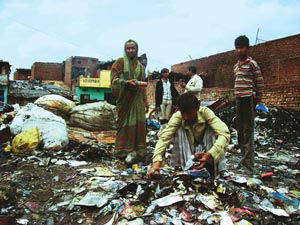 on march 9, 2007, a fire in a scrap godown in an unauthorised colony in Ghaziabad, Uttar Pradesh (up), killed a young boy and left many injured. The cause of fire is still unknown.

The godown is situated within a residential colony, Vikram Enclave, Extension 1, at the Delhi- up border. The godown had come up to cater to the flourishing scrap business at the border, across which Delhi supplies scrap to units in up. "I had gone home for dinner. My two sons were sleeping in the godown. I came out running when I heard about the fire but by that time my younger son Jaseemuddin was charred to death,' said Abdul, a scrap dealer. His elder son Saddam escaped with injuries.

Residents of the area complain that the illegal scrap trade in this residential area continues with the collusion of the police. Damyanti Goel, municipal commissioner of Ghaziabad Nagar Nigam (gnn), confirms these allegations. The trade moved to the Ghaziabad side after several Supreme Court orders (the first came in 1995) required the shifting of polluting industries out of Delhi.

Most of the scrap that circulates is polythene and is classified as solid municipal waste but gnn refuses to take responsibility. Polythene is highly inflammable and hazardous, emitting carcinogenic and neurotoxic substances like dioxins and poisonous gases like carbon monoxide. "Scrap dealers also burn copper wire to separate copper. We have sat on dharna at the gnn health officer B S Baliyan's office. But he hasn't acted as yet,' says a resident.

There is no relief in sight. The Ghaziabad Development Authority (gda) also refuses to act. "Vikram Enclave does not come under gda. It is developed by private builders. We do not have any jurisdiction,' said S P S Raghav, gda's chief engineer.