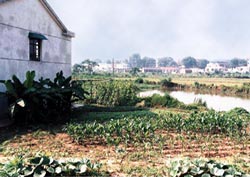 china’s agricultural revolution has come at a cost. With farmers abandoning the millennia-old tradition of growing rice in favour of fruits and vegetables, the soil quality has declined owing to the application of too much fertiliser. This is causing a profound and detrimental affect on the agricultural produce.

These are the findings of a study by researchers from the government’s Institute of Soil Science, Nanjing. They found that fields growing fruits and vegetables for just five years are becoming more acidic and barren. The levels of nitrogen and phosphorus have exceeded the safe limit and fungal epidemics have become very common (Environmental Geochemistry and Health, vol 26, p 97-103, 2004).

Since 1998, the land under grain crops has plummeted by 15 per cent. In August 2004, officials confirmed that grain yields have fallen by one-fifth this year, and consumption is expected to exceed production by a record 37 million tonnes. Rice and wheat cultivation has been abandoned due to the following factors: firstly, China assumed it had solved its food security problem by the end of the 1980s; secondly, the country is speedily urbanising, with cities eating into farmland. Already 500 million Chinese live in towns and cities, and the government wants that to rise to 800 million by 2020. The urban dwellers are willing to pay the high prices of fruits and vegetables. And the government is encouraging farmers to meet this soaring demand by converting rice and wheat fields to grow the more profitable foodstuff. In the past decade, farmers converted 13 million hectares