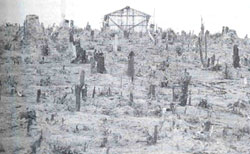 THE colonial myth that shifting cultivation, a traditional farming practice, is the hangover of a dying past still finds devotees from among the Indian bureaucracy. The draft Conservation of Forests and Natural Ecosystems Act proposed in 1994 seeks to give more teeth to the prohibitory powers of forest officers to help curb shifting agriculture.

What strikes one most about the draft Act, essentially built upon those of 1878 and 1927, is that the bureaucracy has chosen to reinforce the colonial myth, ignoring a vast body of scientific findings. Valuable evidence supportive of jhum, established by eminent ecologists, Madhav Gadgil and P S Ramakrishnan, and historian Ram Guha -- or even works of pioneers like Verrier Elwin -- have been blackballed.

Despite settled cultivation being the cornerstone of most present farming programmes, shifting cultivation still continues in a drastically transformed setting, with much shorter fallows, and with competing interests having taken away much of the land. Demographic pressures too have increased. And while deforestation occurs, either under commercial pressures or while transferring land to non-tribals, swiddening cultivators are burdened with the blame, as had happened in the forests of Andhra Pradesh in the 1960s.

Exploitation of tribal land by propagating the myth of the ill effects of jhum began during the colonial era. Our Mughal and Maratha rulers merely collected tributes from tribals and forest people. But firangi raj and the advent of railways transformed trees into vital raw material. As the new rulers extended their powers to the hills, the swidden-farming Paharias of Rajmahal hills, now in Bihar, were pressurised into give up their 'khallu' agriculture. Like other swidden farmers, they were held guilty on 2 counts: they produced too little surplus to yield much revenue; and they damaged timber trees.

Even before the Forest Department was created in 1864, mobile men and women, whether traders, cattle breeders, artisans or adivasis, were regarded as harbingers of disorder. By the 1820s, British administrators in Khandesh in western India had distributed ploughs to the Bhils, urging them to settle down.

It was also believed that swidden was disastrous for forests. Botanists working for the East India Company in southern and western India came up with an early version of the myth of the ecologically profligate tribal, blaming the kumri form of shifting cultivation (practised in the Kanara district of Karnataka) for degrading upland forests, disrupting the water cycle and destabilising agriculture. And, as British historian Richard Grove shows in his forthcoming book, Green Imperialism, though scientists like Hugh Cleghorn blamed British traders and planters, the raj administration chose to hit at the softer target -- the tribals. The officials were protecting the prosperity of the revenue-rich lowlands.

In fact, the Paharia cultivators of Rajmahal were practicing their khallu techniques of burning the vegetation followed by a long fallow, which suited their terrain. Expert plough makers, they sold the instruments to others, rather than using them.

The tribals versus administration conflict had other angles too. The colonisers ignored the tribals' claims to land rights and evicted them to ensure the exploitation of cheap labour and legitimise the taking over of vast tracts of forest land. Swidden was allowed only on lands with inferior soil and scarce timber, as in the small reserve for the Baigas in Mandla, Andhra Pradesh.

Yet, there was and is something more to all this. A recent study by P S Ramakrishnan on the northeast has established that jhum contributes towards increased diversity of plant life. But commercial imperatives of the colonisers meant maximising the regrowth of only a few timber yielding trees, like sal, teak and sheesham. Naturally, British foresters found the tribals and their swidden cultivation coming in the way. So, fiscal and executive pressures helped crack down on jhum to foster the creating of commercially lucrative forests. A narrow range of vendible products was seen to be at risk due to jhum. Where a Baiga or a Paharia regenerated a forest and moved on, the foresters wanted market-oriented land use.

This broad bias was not peculiar to colonial India. In Dutch-ruled Java, foresters even used the term 'robber economy' to describe swidden cultivation. If it was for teak in Java, in Sierra Leone the clash was with oil palm planters. Only the remoteness of French Indo-China's interior hill regions insulated the swiddeners there from such pressures.

In India the forest department had larger holdings of land and was more systematic in its operations its counterparts elsewhere. The controls on shifting cultivation often provoked varied responses from its practitioners. Given their own affinity for plough-based farming, some tribes, like the Gonds in Central India found it easier to adapt to the new regime.

But those who stuck on tried to resist change in many ways, albeit, unaided by the nationalist political elite. The issue of podu figured prominently in many tribal rebellions: in Bastar in 1910, and in Andhra Pradesh among the Saoras in the 1940s. But even the national movement focussed more on the problems of the sedentary, rather than those of shifting cultivators. Apart from a few maverick officials, only field anthropologists sounded dissenting notes. Verrier Elwin, in his superb, monograph on the Baigas (1930) records a song: "Such a calamity has never befallen before! In this raja's reign we are all dying of hunger. He robs us of our axes. He robs us of our jungle." Elwin knew -- and said -- that the British colonisers were guilty.

Traditional forms of production like shifting cultivation are far less destructive to nature and may well hold critical lessons for the sustainable use of marginal lands. Emphasis on the enduring values of traditional agriculture -- notwithstanding cynical accusations of revivalism -- merely calls for jhum techniques to be recognised as important strategies of production. Critical and careful 'learning from tradition', and not a total ban on swidden agriculture is the real solution.

There has been a positive change in the tribal consciousness in general, and today the administration cannot take them for granted, whether they be in Andhra Pradesh, Bihar or Meghalaya.

What we need most is a total break from the colonial mindset. Given a fair measure of support and technical assistance, jhum could become a viable option for the future. The problem with the proposed law is that it wants to impose a 'solution' from above. Instead, we ought to build from below, widening opportunities for the shifting cultivator. The option is simple and clear: shelve the proposed bill and start afresh by taking into consideration our age-old, indigenous knowledge aided by modern technical supports.

---Mahesh Rangarajan is a fellow at the Nehru Memorial Museum and Library. .