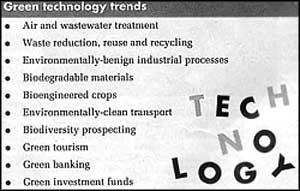 WHAT DIRECTIONS are science and technology going to take now that UNCED has put environment on the political agenda? Though they were not very much in the spotlight, many scientists were present in Rio to stress that while the development of science and technology has been held responsible for the present ecological crisis, the solutions too lie in arnessing of science to meet the ecological needs of today.

M G K Menon, president of the international Council of Scientific Unions (ICSU), in his address to UNCED pointed out, "There is no going back. Our hope for the future lies in further development of science and technology."

Menon said that scientists "have conscious of the steady deterioration that has taken place in the ironment". As a result, numerous inter nal research programmes have been set up to investigate differ-0 Air and facets of the his environment. Waste reduction, of the most important amongst them is the International Geosphere-Biosphere programme (IGBP), started b ICSU in 1986 to understand the interactive physical, chemical and biological process tourism that regulate the entire earth system.

The IGBP today plements the worId Climate Research Programme, sponsored by the World Meterological Organisation (WMO). Together, said Menon, these are the most ambitious and wideranging research programmes on the environment. These are to be soon supplemented by two major observation systems being set up jointly by intergovrnmental organisations and the ICSU - the Global Climate Observing System and,the Global Ocean Observing System.

The US government's position that strong action to, prevent climate change is not economically advisable because of scientific uncertainty has come as a windfall for US scientists. USA has launched a Global Change Research Programme with an annual budget of US $1.4 billion (See box: Launch pads for climate studies).
New understanding It is -now obvious that the growing concern for the earth's climate is going to vastly increase understanding about the atmosphere's relationship with the oceans and the biosphere. The findings of these programmes will sooner or later pro- foundly influence national policies, technology research projects, business interests and even staunchly held political principles like national sovereignty.

International business is already picking up the signals and is, in turn, trying to pass on its own message that it is finally turning green, working hard to produce a generation of environment-friendly technologies. Another message it is pushing is that environmental management and profitable business go together. The Business Charter for Sustainable Development, which was pushed hard in Rio by the International Chamber of Cornifibrce (ICC), states, "Economic groWth provides the conditions in which protection of the environment can best be achieved.... In turn, versatile, dynamic, responsive and profitable businesses are required as the driving force for sustainable economic development ......"

Companies are virtually falling over each other to prove their green credentials. They are claiming progress in a wide range of technologies from ecofriendly cars to new plant varieties that obviate the need for toxic pesticides. And to support them, banks and investment funds are also turning green.

According to a new study, Investing in the Environment, pre pared by the International Finance Corporation (IFC), a member of the World Bank group, the annual global market for environmental goods and services is expected to double from aboiit US $300 billion today to approximately US $600 billion by the year 2000.

The environmental crisis is being viewed by many as business opportunities. J E Connor, ICC president, points out that, in the industrialised world, business enterprise stimulated by market forces has already brought about environmental improvements on many fronts. Every potential innovation, whether a new kind of windmill or a biological water clean-up process, is attracting attention ftom companies.

Political leaders are also watching this trend with keen interest and often with funds in support. Said US President George Bush, in a speech at the Goddard Space Flight Centre two days before UNCED officially began in Rio, "These (developing) countries will need new technologies if they are to enjoy 'Green growth'. And America can provide them. So my budget includes an investment of almost US $1 billion in developing new energy efficient technologies. Hundreds of American businessmen will be travelling to Rio to make the case for our technology.... our plan is to support a broad programme of technology cooperation. In particular, we're going to create a Technology Cooperation Corps to identify the green technology - those green technological needs of countries around the world - and then to knock down the barriers to making it available.

As usual, the Japanese are moving into the green technology market in a planned and coordinated manner. They are planning a world conquest of the global solar energy markets. The fractious crisis between economy and energy, the Japanese feel, can provide them with immense opportunities to , sell their technology to other countries. The Japanese ministrv for international trade and i industrv (MITI) has crafted a detailed 100-year blueprint on how to eliminate the world's pollutants, and is planning a new Research Institute of Innovative Technology for the Earth (RITE). A RITE brochure proudly proclaims its mission: "While the world's environment has undergone great change during the two centuries since the industrial revolution, Japan intends to restore the environment over the next decade."

MITI will promote technologies designed to reduce production of carbon dioxide and other greenhouse gases and the sharing of these methods with developing countries. It is financing an effort to generate clean burning hydrogen, which would not co@tribute to global warma using genetically-engineet bacteria.

In 1990, MITI drew up ".New Earth 21", a five-plank programme that would lead to 11 restoration of the green plan et" by 2100. As this would require new technology, the ministry-created RITE, believed to be the world's fi commercial environmental techno gy institute. With a budget of 6.2 billion yen this year and a sprawling research park set to open next year RITE is modelled after the government-industry consortia that made Japan world-competitive in semiconductors and computers.

MITI has concluded that for such fixes to be truly effective, other nations would also have to use the technology. So it has set up the International Centre for Environmental Technology Transfer.

Japanese companies also have their individual Save-the-Earth plans. In 1988, Toshiba Corporation established an Environmental Mention Center to coordinate its environmental activities. In 1991, it created a Global Environment Committee (GEC) for formulation and approval of the company's environmental policies.

These bodies have helped the company develop strategies to make production processes more environment-friendly..It has significantly reduced industrial waste and plans to cut the volume by 30 per cent by the year 1993. Last year, Toshiba completely eliminated chlorofluorocarbons (CFCs) from the cleaning process in its semiconductor facilities. Now it plans to discontinue use of all CFCs, including in refrigeikators, by 1995-end. Another example is the company's new recyclable refrigerator, with reduced amounts of polluting chlorovinyl resins, and with smaller, more easily detachable parts for easier collection and recycling. Says Fumio Sato, chairman of the GEC, "Instead of focussing on providing cheaper products to satisfy customers, industry needs to focus on using resources efficiently".

Du Pont, the US transnational corporation and the primary producer and inventor of CFCs that destroy the ozone layer, now sees wastes as a profit centre unto itself it has industrialised-numerous products from what had originally been waste in their polymer production line. The BF Goodrich Coffipany in Akron, Ohio, for example, now uses Du Pont waste to produce lyres. Edgar S Woolard, chief executive officer of Du Pont, says, "Industry will have the primary role in making it (sus- tainable development) work. We the experts in development."

Global greenwash
But Greenpeace, an international NGO, warns against transnational companies' attempts to exploit an earth-conscious markia: It is extremly sceptical of statements 1. Woolard's and labels them al. "greenwash". Greenpeace strongly advises the South not to trust the TNCs. Says a Greenpeace report entitled The Greenpeace Book of Greenwash, their dirty industries do not.bring the "luxury" of a clean environment.

However, Christian De Laet from the Gamma Institute in Canada, who has worked on appropriate technologies for the Third World for several years, says, "These technological trends Mll not address the real issues confronting developing countries. They will only keep the modern day princes in power. We need to ensure that the best of science finds its way to the developing world, which can then be adapter by local scientists to meet their needs."

The need to develop capacity the developing world was strongly stressed in Rio by Cyril Ponnamperuma, an accomplished Sri Lankan chemist now living in USA and involved in research on the gins of life. He is presently developing a scientific network - the Third World Network of Scientific Organisations - to enhance the scientific capabilities of the developing world.

M S Swaminathan, an agriculture scientist, is, however, sceptical of the southern, especially lndian response to these changing trend He says, "Unless we take note of these trends now, we will lag behind and end up buying environmentally-sound technology like biopesticides and biofertilisers which have their roots in our traditional agriculture, from westen companies".