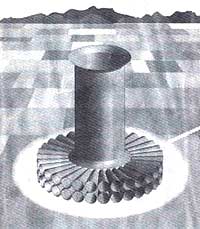 Israeli scientists claim to have devised a cheap way to generate electricity in deserts near the coast by using sea water. The method can also be modified to desalt sea water and use it for desert farming.

The scientists say in this process, sea water is pumped to the top of about a km-high, hollow, cylindrical tower and is sprayed into its centre, where the water rapidly evaporates in the dry desert heat. As the air is cooled by evaporation, it grows denser and heavier and begins descending and by the time it hits the tower bottom, it's travelling at 80 kmph. This powerful downdraft can be piped into tunnels to drive wind turbine electric generators.

By one estimate, one such tower could produce 40 billion to 80 billion kilowatt hours of electricity a year. But there is still one problem to be solved -- disposing of the salt that evaporated sea water leaves behind.