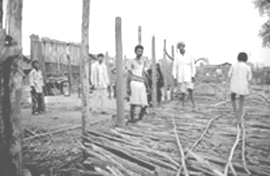 the Madhya Pradesh government would like to forget it. The residents of Dewas district, however, will remember it for the rest of their lives. Four people were killed in a confrontation between the administration and the tribal people at Mehendikheda village, about 100 km from the district headquarters of Dewas, when police opened fire on a group of protesters on April 2, 2001. Several others, including one police personnel, were also injured.

The district administration says the shootout was in self defence