Illuminating the blind spot: a study on illegal trade in leopard parts in India (2001-2010) 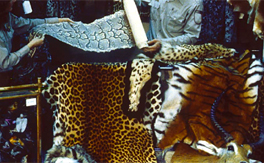 This new study by TRAFFIC based on data collected from 2001-2010, analyses the magnitude of illegal trade in leopard parts in India and identifies the geographic 'hotspots' of trade to aid in the conservation and enforcement efforts.

TRAFFIC undertook a study to document and analyse the illegal trade in Leopard parts in India. Data across 10 years (2001-2010) were collated to understand the magnitude of illegal trade and identify the geographic ‘hotspots’ of trade to aid in conservation and enforcement efforts. By synthesizing detailed information on this illegal trade, it is aimed, firstly, to provide, indicators of the severity of the trade in Leopard parts in India, and secondly, to identify geographic areas where interventions, including more effective and enhanced enforcement measures, would lead to a significant decrease in this illegal trade. These are essential first steps in developing strategies to combat this deadly trade threatening the survival of Leopards in India.

Report: Status of tigers, co-predators and prey in India, 2010.

Report: The disappearing act - the illicit trade in wildlife in Asia.

Report: Skinning the Cat - Crime and politics of the big cat skin trade.