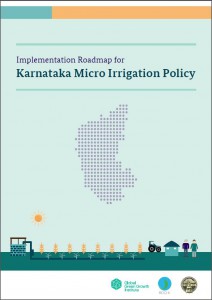 This GGGI developed Implementation Roadmap aims to help the State of Karnataka, India, assess the current status and potential of micro irrigation implementation, appropriate financing and institutional mechanisms that optimize government investments. The Implementation Roadmap was developed in support of the Green Growth Strategy for Karnataka, which was adopted in December 2014, and identifies micro irrigation as a high priority green growth opportunity in Karnataka given that two-thirds of the state’s cultivable area is rainfed and drought prone. As a member of the Karnataka Policy Working Group, GGGI was asked to draft India’s first sub-national micro irrigation policy to ensure equitable and faster adoption of micro irrigation. The Implementation Roadmap is the outcome of this effort and estimates the micro irrigation potential in Karnataka to be in the range of 2.2-2.7 million hectare of state’s Net Irrigated Area. Key recommendations from the roadmap include an autonomous, single- window institutional system for subsidy disbursement based on repeat adoption, potential options to access domestic and international funds to enable expansion at lower costs to government, and the prioritization of low- cost micro irrigation technologies (LCMI) to use as ‘stepping stones’ for eventual adoption of conventional micro irrigation systems. A robust Monitoring and Evaluation System and Capacity Building Plan is also recommended. The roadmap also establishes that Micro Irrigation, if promoted in Karnataka, could also help in income enhancement, beyond the anticipated water and energy savings.