Resilience in Zambia: impact evaluation of the 'Citizen Participation in Adaptation to Climate Change' project 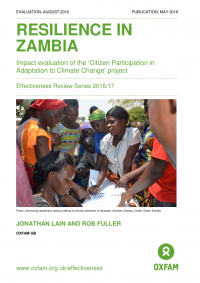 Oxfam GB’s Global Performance Framework is part of the organization’s effort to better understand and communicate its effectiveness, as well as to enhance learning for staff and partners. Under this Framework, a small number of completed or mature projects are selected at random each year for an evaluation of their impact, in an exercise known as an ‘Effectiveness Review’. One key focus is the extent to which the projects have promoted change in relation to relevant Oxfam GB global outcome indicators. During the 2016/17 financial year, one of the projects that was randomly selected for an Effectiveness Review was the Citizen Participation in Adaptation to Climate Change (CPACC) project, carried out in Zambia from April 2013 to March 2015. The CPACC project was the third in a series of projects that were launched in response to flooding across southern Africa in 2008 and 2009. Oxfam implemented this sequence of projects in Zambia in partnership with three local non-governmental organizations (NGOs), the People’s Participation Service (PPS), the Program for Sustainable Rural Development (PSRD) and the Southern Partners Organization (SPO).