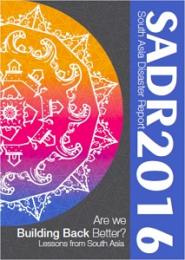 This edition of the South Asia Disaster Report concentrates on Build Back Better (BBB), highlighting new and alternative disaster management measures to improve resilience of vulnerable communities. It explores initiatives by citizens, the state and development practitioners in South Asian countries who have led the way in improving actions for rehabilitation and recovery in South Asia. The case studies focusing on BBB cover the Earthquake in Nepal in 2015, the Meeriyabedda Landslide in Sri Lanka in 2014, the Uttarakhand Floods, Cyclone Phailin and Cyclone Hudhud in India in 2013, Cyclone Sidre and Aila in Bangladesh in 2007 and 2011, and the monsoon floods in Pakistan in 2012 and 2013. It also looks across the region at reducing risks to cultural heritage in South Asia.