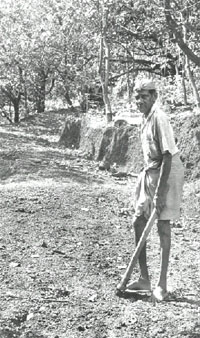 A thin strip of land trapped between the Arabian Sea and the Kerala backwaters. This is Challanam in Ernakulam district. Freshwater used to be very scarce. Although it rains in torrents during the monsoon, the water would flow into the sea. Groundwater was useless due to ingress of saline water. Pipes would fetch water from 30 km and leak a little for half an hour each day. "The government would never heed our cries of help to harvest this seasonal gift for use in hard times," says Kusuman John, vice president of the Challanam Panchayat.

Things changed. The state government launched a major drive to devolve power to local government institutions. After 1996, up to 40 per cent of the annual budget was put directly into the hands of municipalities and panchayats (councils)."Once we had the power to plan for ourselves, the first thing the gram sabha (village assembly) decided upon was a programme to capture rainwater from the roofs," says Edward P A, a member of the panchayat. With the Rs 2,000 that the panchayat provided for pipes and handpumps, 300 families harvest rain. As fresh water seeps into the underground aquifers, saline water is pushed out. Freshwater supply is assured throughout the year.

Olavana Panchayat of Calicut district was also facing water shortage. Decentralisation of planning led the residents to form cooperatives to get piped water supply. A dream came true for the Mairi, 80, when the panchayat gave him financial support to build a house. He toiled for one month, cutting a small hill to build a 1.5 km long road to transport building materials. "This is freedom," he says.

The Potamal Panchayat of Idukki district was divided by a stream that runs through it. After receiving the power to plan, the first thing the panchayat did was to build a bridge. Today, development efforts like watershed development are undertaken for the panchayat as a whole and everybody reaps the benefits. Better communication has changed lives.

Something big is happening in Kerala, and not too many outside the state seem to be aware of it. The state is making important strides towards decentralisation, which is to most other governments merely a nice, politically correct term. To most familiar with Indian politics, decentralisation and Panchayati Raj mean a step-by-step, bureaucratic process that makes for excellent satirical writing. Administrative support mechanisms, institutional changes, transfer of staff, awareness campaign... and then, finally, the transfer of financial powers.

Not for Kerala, this jargon. The mantra is simple: if people are to be empowered, they should first have the power to make their own plans and have the money to execute them. The civil society has pushed this agenda through, especially after the Left Democratic Front (ldf) came to power in 1996. Politicians have been forced to heed to the call as it has become an issue of their political survival. The state government has amended 38 existing acts. The State Administrative Reforms Committee has been passing 70 orders on an average every year since 1996.

The state government estimates that it has devolved 60 per cent of its work to the local bodies. Panchayati Raj institutions now plan for their annual needs and implement projects. The budgeting process starts with the 1,000-odd gram sabhas (village councils). "After the agrarian movement of the early 1960s, this is the second movement (of this scale) that Kerala is witnessing," says K N Raj, noted economist, who was one of the authors of India's First Five Year Plan. Madhavan Kutty, resident editor of the Thiruvananthapuram edition of The New Indian Express, points out: "The panchayat offices are more crowded nowadays than the offices of political parties, where one would earlier have to go begging for development-related work." Says G Appukuttan Kani, president of Vithura Panchayat of Thiruvananthapuram district: "Only now are we getting a taste of real democracy."

Are things so dream-like all across Kerala? Not really. There are problems, especially with the bureaucracy, which is nervous about power slipping out of its hand. There are allegations that the process has only decentralised corruption. But whatever the pitfalls, this movement is definitely worth examining closely.