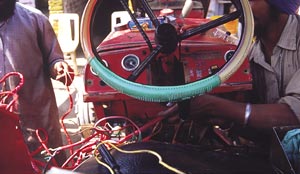 Tractors in India are out of reach for the majority of farmers. The cheapest tractor costs Rs 1.8 lakh, almost as much as a new car. But while a car is a luxury, a tractor is not: it’s becoming an imperative as the demand for food grains increases.

Barely two per cent of the 115 million farmers own a tractor, according to the 1995-1996 agricultural census. Yet, tractors cultivate almost one third of the country’s arable land, states N S L Srivastava, agriculture engineer and joint director of Sardar Patel Renewable Energy Research Institute in Vidyanagar, Gujarat.

Since the two per cent farmers possessing tractors do not own one third of the country’s arable land, how do we explain Srivastava’s claim? We can do this in the light of two facts. First, most farmers possessing tractors are rich and own large land holdings. Second, tractors are available on hire. The hiring rates vary from region to region and also with the nature of work. For instance, the rate for ploughing is Rs 200-250 per hour or Rs 2,000-2,500 per hectare (ha).

But small farmers are unable to reap such benefits. For them, a low-priced, small tractor of 15-24 horsepower (hp) would be ideal. This need was recognised as early as 1970 when the National Commission on Agriculture (NCA) was set up. After a five-year study, NCA submitted a long report in 1976, which also recommended the type and quantity of tractors India should have by 2000: 2.08 million tractors and power tillers (a farm machine, with two wheels, to till the soil) below 15 hp, 0.12 million medium tractors of 35 hp and 80,000 65 hp tractors, which taken together would total 2.28 million.

This policy argued that 2.08 million tractors and power tillers below 15 hp were needed for small and medium farmers. Besides, they are considered more suitable for paddy cultivation