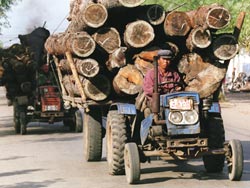 Tractors came to India in the 1960s, imported from the US and European countries, mainly the erstwhile Soviet Union. But these countries had large land holdings; most tractors made there were of medium to high horsepower. In a country where landholdings were not so large, such tractors came to be replicated, unthinkingly. India also imported tractor kits that could be assembled. In 1961-1962, about 880 such tractors were assembled from kits purchased from British and German firms.