Is the joyride over ? 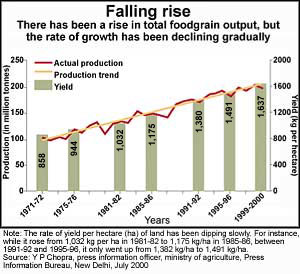 It's been 50 years since politicians have been mouthing the slogan: Jai jawan, jai kisan (Long live soldiers, long live farmers). Now it has started to sound like a raucous chant, at least to the farmers struggling to survive. They till the soil harder, increase their spending to replenish their patch of land, but nothing helps. It is the marriage between science and farming practices that has failed. The more they try to revive it, the more they get mired in the labyrinth.

The maze encompasses the use of high-yielding varieties of crops, spraying pesticides to ward off uninvited guests from their fields and rejuvenating the soil with fertilisers. All this to ensure that their crops have all the ingredients for a good harvest.

The Green Revolution (GR) was what this practice was called when it started in the late 1960s. During the time GR was envisaged, India was reeling under a severe drought. Its dependence on imports to feed its rising population was unprecedented. "The GR is the best that could happen to India. The then agriculture minister, C S Subramanium, told me later that there was food stock only to last for the seven days," recalls Davinder Sharma, a New-Delhi based agriculture analyst.

The objective was met. Food production registered a phenomenal increase during the next two decades. From 10 million tonnes in 1967, food imports dropped to 0.5 million tonnes by 1977. Today, India imports very little wheat, and no rice. Unfortunately, though agricultural production has continued to increase, rate of yield per hectare has started to a decline (see graph: Falling rise).

Today, many stand disillusioned. With the benefit of hindsight, many are trying to understand where India went wrong. "At the time GR was adopted, sustainability issue was not the criteria. The only way out was to pump in the inputs so that production rises," says Abhijit Sen, chairperson, Commission on Agricultural Costs and Prices, ministry of agriculture.

It was a strong 'reductionist' strategy, not a total one. It was not sustainable. It did not incorporate forward and backward linkages," says Pramod Kumar, director, Institute for Development and Communication, Chandigarh. Furthermore, it was a grain revolution, not a GR, he says. Wheat and rice became the kings among crops. These were not the traditional varieties. With GR came the water-thirsty, chemical-intensive hybrid varieties. Even M S Swaminathan, the father of GR and former director of Indian Agricultural Research Institute, New Delhi, had warned of the dangers when GR was adopted. Addressing the Indian Science Congress at Varanasi in January 1968, he has said: "Exploitive agriculture offers great possibilities if carried out in a scientific way, but poses great dangers if carried out with only an immediate profit motive. The emerging exploitative farming community in India should become aware of this. Intensive cultivation of land without conservation of soil fertility and soil structure would lead, ultimately, to the springing up of deserts. Irrigation without arrangements for drainage would result in soils getting alkaline or saline. Indiscriminate use of pesticides could cause adverse changes in biological balance and lead to an increase cancer cases and other diseases, through the toxic residues present in the grains or other edible parts. Unscientific tapping of water will lead to exhaustion of this wonderful resource left to us through ages of natural farming."

His words were prophetic. Without the management systems, agricultural disaster, rather than prosperity, has taken place in barely three decades. Increased demand for water led to over extraction of groundwater. Channeling of water from rivers or streams followed. The natural drainage pattern was destroyed. Now, some GR regions are turning to deserts due to water depletion while other places are suffering from severe water logging. The latter has also led to unproductive saline fields. David Seckler of the International Irrigation Management Institute, Sri Lanka, describes India as 'being on a free ride expanding on agriculture by depleting groundwater reserves. "At some point, this house of cards will collapse and when it does, India's grain harvest could fall by as much 25 per cent. In a country where the supply and demand for food is already precariously balanced and where 18 million people is added every year, this is not a happy prospect," he says.

Besides, indiscriminate use of chemicals and intensive cropping have robbed the soil of its nutrients, poisoned the groundwater and contaminated crops.

No other state illustrates the ugly face of GR more than Punjab, the state that supplies food to almost all the states in India. Unfortunately, the happy image of the turbaned, muscular man waving a kerchief while plying his tractor across lush green fields is but a picture of the past. While trying to feed the rest of the nation, Punjab has lost its prime land. Central districts face a desertification threat, while the southwestern districts are swamped in excess water. The state on which the rest of India relies on for foodgrains is in grave danger.