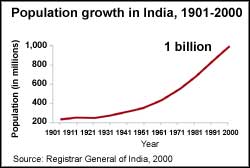 India is fast becoming the land of superlatives. For all the wrong reasons, of course. Be it August 15, 1999 (UN prediction), or May 11, 2000 (government of India estimates), the nation has reached the inevitable mark. At the time of Independence, the country's population was as low as 350 million. Five decades later, the number has multiplied three-fold (see graph). The growth rate is 1.8 per cent per year, comparatively higher than China's 0.9 per cent. This despite the country being the first in the world to adopt a family planning policy in 1952.

At the current rate, India will reach the 1.5 billion mark by 2050. "If the total fertility rate (tfr), the average number of children a woman bears in her lifetime, declines to 2.1 by 2010 and remains constant, India's population will add half-a-billion by mid-century and continue to grow. Only of the tfr drops will the population stabilise by 2050,' says Mari Bhatt, professor, Indian Institute of Economic Growth, Delhi University.