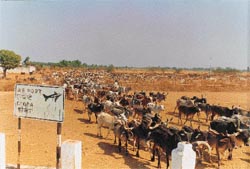 AS FAR AS the eye can see, it is a mass of horns in a desiccated, semi-arid landscape. The horns emerge sideways from the head, turn up, and then arch back at the tips, as if swept back by the wind. Kankrej, native to northern Gujarat, is quite a regal-looking breed of cattle. But the hundreds of animals here look horribly emaciated, as if waiting for death. They have been abandoned by the rural people of Gujarat as they are left with nothing to feed the animals. There is a drought. If you stand on a highway and count the number of trucks that haul fodder, you will think it is the most precious commodity. It is.

This has been a common sight for the past seven months at many of the 242 pinjrapols (cow sheds) of Gujarat, managed by the Jain Mahajan community, which has a long tradition of jeev daya (compassion for all life forms). As early as February this year, there were more than 150,000 abandoned animals in the pinjrapols, mainly cattle. Apart from the overheads, the daily expense on fodder is running into several lakh rupees.

This is not unusual. Pinjrapol literally means a locality of cages. It is a shed where people traditionally left old or crippled animals who they could not support. In times of drought, it has been common practice in most parts of India to leave animals at a pinjrapol. People would come back for the animals after the monsoon rains, when grass would become available.

However, these are different times. In the past few years, people keep pouring in to leave their animals. But they do not take them back after the monsoon rains, say the managers of pinjrapols. Even if there is no drought, it is not easy to get grass as most gauchar land (grazing areas managed by village communities) has either been redistributed by the government or usurped by powerful farmers with political connections.

There is no place in government policies for the poor who depend on these animals. Although 70 per cent of India's farmers cannot afford tractors, government subsidises tractors, diesel and chemical fertilisers. This has tampered with the two most important reasons for rearing cattle: draught power for farm work/transport and dung for manure.

In fact, the government's promotion of tubewells has spelt doom not just for the livestock but has worsened the suffering in the present drought. As the government started providing cheap diesel and electricity for extraction of groundwater without putting in place any regulations against overuse, farmers and industries started milking underground aquifers. The water table has fallen abysmally. The animals have landed up in pinjrapols. Human destinies are tied with those of livestock. The state of one indicates the state of the other.

Ask Ishwarjibhai Kanaji Solanki, 25-year-old farmer who stands by a state highway just outside Rajpur town in Banaskantha district of Gujarat, waiting for a lift. He waves to a vehicle, hoping to be dropped to village Chandarva, where he lives. He is waiting for another lift, figuratively