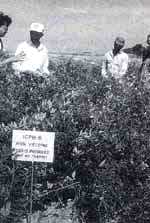 THE HUMBLE tur or arhar dal, a traditional food crop in arid areas, is now being grown as a cash crop by farmers attracted by its high market value. Seed companies are thus showing a keen interest in a new hybrid of the dal, also known as pigeon pea (Cajanus cajan). But some scientists fear because of its high cost, the hybrid will more likely be picked up by rich farmers than subsistence farmers in the arid regions when it becomes available next year.

ICPH-8, the world's first pigeon pea hybrid, was developed by scientists at the International Crops Research Institute for the Semi Arid Tropics (ICRISAT) in Patancheru, near Hyderabad. It matures in 100 days -- half the time of conventional varieties -- and because it is in the field for a shorter period, it is less exposed to environmental stresses. ICRISAT scientists claim the hybrid has a 40 per cent to 50 per cent higher yield than the best varieties.

Well recevied
Says ICRISAT's principal pigeon pea breeder R P Ariyanayagam, "This hybrid has been received well. Though developed for south and central India, we have also had enquiries from other parts of the country."

However, one year's crop cannot be used as the next year's seed without a fall in yield. To maintain the high yields, farmers have to go back to the seed companies. Seed production is a tedious and expensive task, and consequently the new hybrid seeds cost about Rs 60-80 per kilo -- Rs 750 a hectare.

Pigeon pea plants are bisexual and self-pollinating -- the male pollen is transferred by insects to the female stigma of the same plant, making hybrid development that much more difficult. A hybrid demands that cross-pollination occurs between two appropriate varieties, ensuring that the offspring has the better characteristics of both parents. To develop a pigeon pea hybrid, a sterile male line is essential to act as a receptor for pollen.

Scientists at ICRISAT methodically screened each of the 12,000 pigeon pea accessions for the male sterile line. Each germplasm line was grown in an experimental plot and a male sterile pigeon pea variety -- MS Prabhat, characterised by white translucent anthers due to an absence of pollen grains, was identified in 1974. About 1000 varieties were then crossed and tested at ICRISAT before ICPH-8 was developed by crossing MS Prabhat with the ICPL-161 variety.

MS Prabhat came from field collections in India. Its male sterility is genetically determined and is controlled by a single recessive gene. As a result, not all MS Prabhat plants are male sterile and the fertile plants have to be weeded out as they may contaminate the entire hybrid seed production process. This, some scientists say, pushes up seed production costs.

ICRISAT scientists found that to produce a set of hybrid seeds, one row of male fertile pollinator ICPL-161 should be planted after every six rows of male sterile MS Prabhat plants.

The flowers and subsequent pea pods of ICPH-8 appear at regular intervals, starting at the lower end of each branch. This ensures some fruit survive even if exposed to adverse environmental conditions. ICRISAT scientists claim the new hybrid can tolerate a wide range of growing conditions, from extremely wet to abnormally dry. Its vigorous root system explores a larger area and as a result, the plant can withstand drought better. Says Ariyanayagam, "Though ICPH-8 is susceptible to some pigeon pea diseases like fusarium wilt and sterility mosaic diseases, its short maturation time helps it escape major damage."