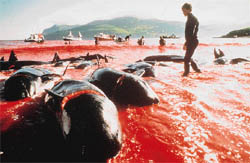 the International Whaling Commission (iwc) has never faced such a threat to its very existence. The 53rd meeting of the iwc, held in London from July 23-27, is a definitive pointer to it. As its 43-member countries stood sharply polarised on the line of pro and anti-whaling, the meeting discussed more on the effectiveness of the iwc than its prime objective of conservation of whales and its sustainable utilisation. "It is like a whale-old and toothless,' said Richard Cowan, head of the British delegation. The issue of allowing partial whaling dominated the meeting. According to observers, if the iwc fails to give in to the pressure of whaling countries by next year, it may cease to exist.

Just before the meeting, a series of incidents not only undermined iwc's credibility, but also intensified the propaganda war between pro-and anti-whaling countries. Countries like Japan and Norway support whaling, while Australia, usa, New Zealand and the uk lead the anti-whaling group. Norway, a major whaling country, declared that it would resume export of hundreds of tonnes of Minke whale blubber to Japan in defiance of international ban on whale trade. Norwegian authorities called this trade resumption