Protests against retail chains getting into fruits and vegetables 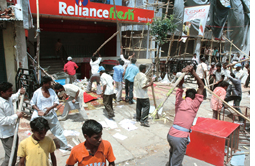 At least three major cities saw protests in May against Reliance, India's largest corporation, entering the business of retailing fresh vegetables and fruits through its brand Reliance Fresh. In Ranchi and Indore, the protests had political backing and turned violent. The protestors, mostly street vendors, fear the company's low prices will destroy their market.

While it is too early to know if their fears are founded in reason or hype, the protests also stem from the fact that they feel cheated by a government that is in a hurry to promote large retail businesses and refuses to keep its promises made to small vendors and retailers, who control about 95 per cent of the country's overall retail business.

India has an estimated 12 million street vendors in its cities