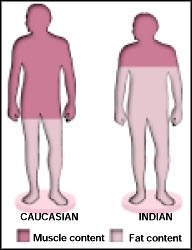 Although obesity is today a global pandemic, research on the disease in India is still nascent. This worries experts: nearly 15-30 per cent of the country’s urban population and four to eight per cent of the rural population is either overweight or obese, with children forming 16-18 per cent in this group. It is a rising trend, experts say; the rate at which urban Indians are turning overweight or obese already equals that found in Western European cities. An added concern is the parameters by which an Indian