Cooling agents: an examination of the informal recycling sector in mitigating climate change 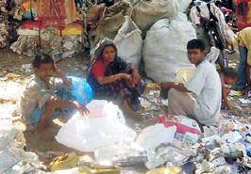 This study by Chintan examines role of the informal recycling sector in climate change mitigation in developing countries, with focus on India. Shows that informal sector in Delhi reduces emissions by an estimated 962,133 TCO2e which is 3.6 times more effective in reducing emissions than formal waste management units.

The key finding of this study is that the informal recycling sector in Delhi alone accounts for estimated net GHG reductions of 962,133 metric tons of carbon dioxide equivalent (TCO2e) each year. This equates roughly to removing 176,215 passenger vehicles from the roads annually or providing electricity to about 133,444 homes for one year (US estimates). It also compares favourably with the average annual emissions reductions from several formal waste management projects in the city that have received carbon finance through international mechanisms.
The study first reviews the current waste management challenge faced by Indian cities and the ways in which formal and informal actors work to meet this challenge.

The study then provides a snapshot of India