The cost of the double burden of malnutrition: Social and economic impact 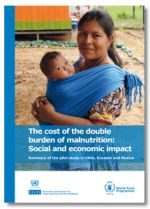 The epidemiological and nutrition transition of Latin American countries imposes a double challenge for nutrition and food security public policies. On the one hand, to continue the task of eradicating young child undernutrition and, on the other, to face the increasing prevalence of overweight and obesity. The international relevance of this reality has resulted in both dimensions of malnutrition being included in the Global Goals for Sustainable Development. One of the targets of Hunger Zero, the second global goal, is “by 2030, ending all forms of malnutrition, including achieving, no later than 2025, the goals agreed to internationally on delayed growth and emaciation of children younger than five years old, and addressing the nutritional needs of adolescents, pregnant and breastfeeding women, and the elderly”. This report reveals that the combined impact of undernutrition and overweight/obesity, also known as the “double burden of malnutrition,” has contributed to the loss of billions of dollars to Latin American economies.