The impact of larger-scale agricultural investments on local communities 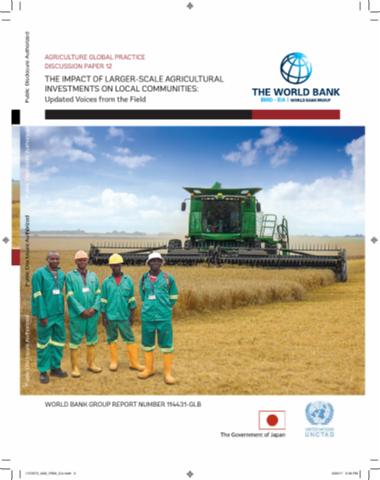 This report is an update to the UNCTAD/World Bank study (the “first phase”). Following that researchers revisited eight operations in four countries (Cambodia, Ethiopia, Mozambique and Tanzania), conducting a total of 113 detailed additional interviews with 349 stakeholders primarily from local communities in which the agribusiness operations are based. This report presents an updated set of findings based on these follow-up interviews; as this report is not a stand-alone piece, it should be treated as supplemental material to the original study, and the findings contained in the two reports should be viewed in unity. Accordingly, the tables in Section 1.3 of this report provide an updated version of the tabular summary findings from the first phase report that have been augmented and revised based on findings from the additional fieldwork. The main intention behind the second phase of fieldwork was to deepen and enrich the data sample and information collected, by conducting further interviews in order to augment, challenge and/or verify the findings of the original study. In the second phase, research teams spent more time with local communities and other stakeholders(interviewees are referred to as “external stakeholders”) which had not been possible in the first phase, due to time and resource limitations. This updated report seeks to describe in a more nuanced manner the perceived impacts arising from associated agribusiness investments, including spillover effects on the local community and more widely—whether intended or unintended. Given the complexity of impacts, these cannot be regarded simplistically as ‘good to be recommended’ or ‘bad to be corrected’; nevertheless, they offer essential ground-level insights from which to deepen understanding of outcomes and draw lessons.