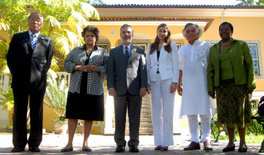 This document contains the Joint statement issued at the conclusion of the Fourth Meeting of Ministers of the BASIC Group took place in Rio de Janeiro on the 25th and 26th of July 2010.

Ministers reiterated the importance of the two pronged approach, which envisages, an ambitious and comprehensive outcome for the negotiations under both the Ad Hoc Working Group on Long-Term Cooperative Action under the UNFCCC and the Ad Hoc Working Group on Further Commitments by Annex I Parties under Kyoto Protocol, and, considers the elements for an equitable and balanced outcome in Cancun, covering, for example, different initiatives which could be supported by fast-start finance.