The Least Developed Countries report 2011: the potential role of South-South cooperation for inclusive and sustainable development 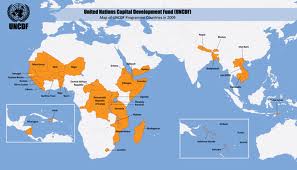 The least developed countries (LDCs) are a group of countries that have been classified by the United Nations as least developed in terms of their low gross domestic product (GDP) per capita, weak human assets and high degree of economic vulnerability. This Report argues that the LDCs need to go beyond business as usual in order to promote inclusive and sustainable development and it suggests how South–South cooperation supports such a transformational agenda. The Report shows that despite strong GDP growth during the last decade, the benefits of growth were neither inclusive nor sustainable, mainly because growth was not complemented by structural transformation and employment creation. Growth and trade has not-recovered to pre-crisis levels after the global recession of 2009. Most LDCs continue to deepen their specialization in exports of primary commodities and low-value, labour-intensive manufacturing, rather than diversifying into more sophisticated products. Growth projections also indicate that the poorest countries of the world could face a more volatile and less expansive global economic environment in the coming decade.