Missing the 23 per cent target: roadblocks to the development of renewable energy in Indonesia 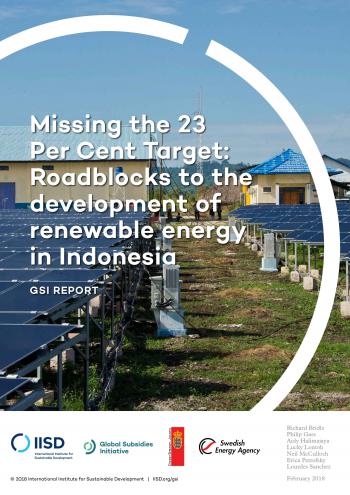 On January 25, 2017, Indonesian Minister of Energy and Mineral Resources (ESDM) Ignasius Jonan stated, “Indonesia is resolved to increasing its new and renewable energy mix to 23 per cent in 2025 in line with its commitment to reducing its greenhouse gas emissions it had made during the COP 21 conference in Paris in 2015.” The commitment to increase renewable energy was made as part of a package of measures to tackle climate change in Indonesia’s Nationally Determined Contribution (NDC) that pledged to reduce emissions by 26 per cent against the business-as-usual scenario by 2020 and 41 per cent if international support is granted. With this high-level commitment to a marked expansion of renewable energy—together with the international context of falling renewable energy prices—one might expect that renewable energy in Indonesia would be booming. However, since 2007 most of the increase in electricity production has come from coal and the share of renewable electricity production has remained relatively static, at around 12 per cent of total generation. Between 2007 and 2016 hydro and geothermal capacity increased by 39 and 67 per cent respectively. But overall installations pale in comparison to coal, while solar remains almost nonexistent (45 MW total). This report seeks to answer the question of why renewable energy deployment, particularly wind and solar, has not taken off in Indonesia. To understand the forces shaping the sector, and what can be done to remedy the situation, IISD conducted interviews with politicians, civil servants, industry representatives, renewable energy developers, civil society organizations, international donors and other stakeholders. A total of 26 interviews took place, revealing the roots of the problem, the broader political economy of the energy sector and some possible ways forward.