The role of plug-in electric vehicles to improve fuel economy 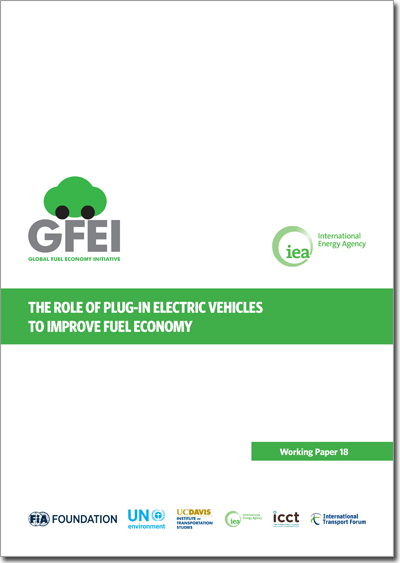 Plug-in electric vehicles (EVs) are well equipped to significantly increase the pace towards greater fuel efficiency, according to the latest Global Fuel Economy Initiative (GFEI) working paper. PEVs also present significant benefits in terms diversification of the transport energy mix, the reduction of local pollution and greenhouse gas emissions, as well as in facilitating the transition to a clean energy system. GFEI has set its target ‘50by30’ to double the average fuel economy of new light duty vehicles (LDVs) globally by 2030 compared to 2005 figures. This means reducing fuel consumption by 50% (in litres per 100km) and halving carbon emissions in grams of CO2 per kilometre. The target was set in 2010, based on assessments that it could be met using cost effective technologies without full electrification. However, GFEI partners welcome the swift developments in electric technology since this goal was set, and support the wider roll-out of PEVs to improve vehicle efficiency, which will enable countries to more easily achieve the GFEI target and, ultimately, the climate change targets set in Paris in 2015. PEVs are up to three times as efficient as conventional internal combustion engine (ICE) powered cars, and almost twice as efficient as hybrid car which alternate between the two systems.