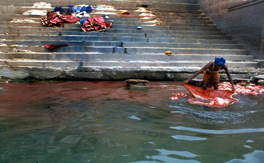 The status paper on Ganga by the Ministry of Environment. Provides a critical analysis of GAP & says that river water quality has improved at many locations however, the critical parameters of water quality, which affect human health, exceed the prescribed standard limits at major locations.

Rapidly increasing population, rising standards of living and exponential growth of industrialization and urbanisation have exposed the water resources, in general, and rivers, in particular, to various forms of degradation. The deterioration in
the water quality of the river impacts the people immediately. Many Indian rivers, including the Ganga in some stretches, particularly during lean flows, have become unfit even for bathing. Realising that the rivers of the country were in a serious state of degradation, a beginning towards their restoration was made with the launching of the Ganga Action Plan in 1985. It was envisaged as a comprehensive programme of river conservation with the objective of improving the water quality. It was visualised that in due course, the programme would be enlarged to cover other major rivers of the country. GAP has been a mixed success. Though the programme yielded good results in many stretches, the problem of pollution in river Ganga has not been fully addressed. The river water quality has improved at many locations despite significantly increased demographic and other pressures. However, the critical parameters of water quality, which adversely impact human health, exceed the prescribed standard limits at major locations.