Unbreakable: building the resilience of the poor in the face of natural disasters 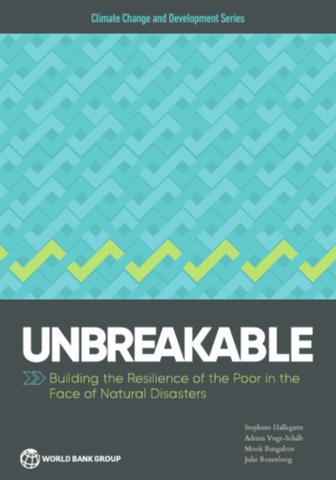 The impact of extreme natural disasters is equivalent to a global $520 billion loss in annual consumption, and forces some 26 million people into poverty each year, a new report from the World Bank and the Global Facility for Disaster Reduction and Recovery (GFDRR) reveals. Severe climate shocks threaten to roll back decades of progress against poverty. Storms, floods, and droughts have dire human and economic consequences, with poor people often paying the heaviest price. Building resilience to disasters not only makes economic sense, it is a moral imperative. The report, Unbreakable: Building the Resilience of the Poor in the Face of Natural Disasters, warns that the combined human and economic impacts of extreme weather on poverty are far more devastating than previously understood. In all of the 117 countries studied, the effect on well-being, measured in terms of lost consumption, is found to be larger than asset losses. Because disaster losses disproportionately affect poor people, who have a limited ability to cope with them, the report estimates that impact on well-being in these countries is equivalent to consumption losses of about $520 billion a year. This outstrips all other estimates by as much as 60 per cent.