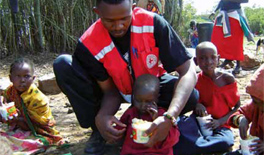 This World Disasters Report (WDR) focuses on forced migration and on the people forcibly displaced by conflict, political upheaval, violence, disasters, climate change and development projects, whose numbers are increasing inexorably each year. To explain the crises of disaster and displacement, it points at the lack of disaster risk reduction (DRR) strategies, poor emergency preparedness, lack of adequate building codes, high levels of poverty and similar weaknesses in local and national governance capacity, rather than at the hazard itself. The overall report analyses the complex causes of forced migration and its consequences and impacts on displaced populations, their hosts and humanitarian actors. It looks at the significant gaps in humanitarian protection for ever-increasing numbers of forced migrants who do not fit into conventional categories of protection, and the public health challenges caused by forced displacement, particularly for women, children and those with mental ill-health problems.

Report: State of the world's refugees.