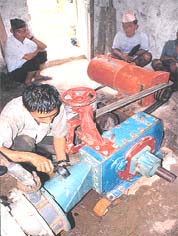 Three years ago, when Chija Maya, a resident of Piughar, spoke about a run-of-the-river microhydel power station in her village, many people thought that she was whistling in the dark. Though hydro-electricity first came to Nepal in 1911 to light the King’s palaces, it still remains a dream for 85 per cent of its population; 90 per cent of rural Nepal is yet to be electrified. With help from undp ’s Rural Energy Development Programme ( redp), Maya mobilised the community and convinced them about the electricity project. Villagers pooled in more than Rs 1 lakh (Nepalese rupees) and dug a 200-metre-long canal to propel the 50 kg turbines. “For us it was a major victory when we got electricity. Life has changed now,” she says.

To assess the spread of microhydels in Nepal, a visit to the Kathmandu Metal Industries, Nepal’s oldest manufacturer of microhydel systems like turbines, can be quite fruitful. “Every month we get four to five microhydel installation orders and countless visits from people wanting to take electricity to their villages,” says Akkal Man Nakarmi, the owner of the firm.

He says at least one village decides to install its own powerhouse everyday. According to Nakarmi, the rush is in the 5 kw sector. “This suggests that villagers are also planning their energy policy, since above five kw is not suitable for a typical Nepalese village,” he says. According to redp , Nepal’s only national programme in the energy sector, by the end of 2000 Nepal would add 50 per cent more power to its capacity through these micro sets. For a country where only 15 per cent of its population have access to electricity, this is encouraging news.

Shedding new light
Nepal is the first south Asian country to privatise its power sector. In 1985, it delicensed projects up to 100 kw to upgrade the ghattas (traditional watermills). In fact for this micro sector, the country’s electricity department is not involved at all. Anybody can go for a hydro project by getting a loan sanctioned from the Agricultural Development Bank of Nepal ( adb ), which is extensively funding such efforts. The communities can also decide on the distribution and the cost of power.

“Upgradation of the ghattas and the growing demand for the sets up to 5 kw, is the technological reply of the people to the challenging mountain electrification,” says Nakarmi. Out of Nepal’s 30,000 traditional watermills, 1,200 have been modified to generate over 3,000 kw of electricity. The government does not take any royalty or tax from these projects. Instead, it gives soft loans, subsidies and tax exemptions on electrical machines as incentives.

“It is a social process where the community has snatched the initiative from the government and has now forced it to facilitate their efforts,” says Urmila Simkhada, a Kathmandu-based social scientist. According to her, everyday a new history unfolds in Nepal’s remotest villages with the advent of electricity. In remote areas, villagers are seeing their prime minister on the television screen for the first time.

“The coming of electricity has changed village life,” says Sunkumari, a community mobiliser with redp. Women no longer spend hours for husking and milling; during the day, electricity is used for milling. “We save about four hours every day,” says Sunkumari. Saving in time means more time to spend with children. “At night children study for more than two hours and their performance has gone up,” says Maya.

In Lamjung district of central Nepal, residents and the district development committee have invested in a company which aims to chart out an integrated energy plan for the district. This involves all forms of renewable energy, including community forestry, biogas schemes, solar photovoltics and small hydro schemes. They are also planning to sell the surplus power to the national grid.

Undercurrents
Though 85 per cent of Nepal’s population do not have access to electricity, the abundant water resources always made an average Nepalese to dream about the ‘hydro-dollars’. Nepalese have been fascinated by the possibility of generating electricity from the 6,000-odd streams and rivers. The 1970s oil crisis made this fascination for tapping hydropower into an obsession. After nine decades of Nepal’s first 500 kw Pharping hydroelectricity project built in the Kathmandu valley to light the palaces, Nepal has been able to install only a total of about 250 mw hydropower, an average of less than 3 mw per year. From 1968 to 1975, there was a surplus of power as there was no infrastructure to consume it in remote areas.

In 1977, the government decided to form the Small Hydel Development Board for supplying electricity to remote areas. It built 30 plants having a total capacity of 5.7 mw . But this was taken up only for the district headquarters and other politically earmarked areas. The project suffered from absence of market in the remote areas and a lack of a target-oriented policy. The board failed to deliver.

In 1981, the ministry of water resources prepared a national development strategy “through the utilisation of water” and hydropower generation. The strategy clearly stated that as almost 60 per cent of the population live below the level of absolute poverty, small-scale projects and programmes should be taken up to directly benefit the rural masses and provide them with new opportunities for self-reliance.

This brought the adb into the picture. The adb started funding microhydel projects in 1981 and now supports around 80 per cent of the microhydel projects in the country. Till now the units supported by adb generate 4025.4 kw of power through 1,000 units. In a network covering 60 districts, the bank has given Rs 21,900,000 as subsidy and Rs 35,100,000 as loans. Since 1993-94, it has handed over the management of 31 projects to these groups of farmers after forming them as cooperatives (see graph: growing power ).

In 1984, the government was decided to delicense all electricity installations under 100 kw capacity. This led to upgradation of ghattas for electricity generation at night. It continued till 1985-86, when the government announced a subsidy on the electrification costs of the private installation: 50 per cent of the costs of generators and electromechanical parts (75 per cent on the remote areas). It made electrification more attractive and many sick watermills were converted for this. Also, exclusive power generation units came up. In 1985, it delicensed projects up to 1,000 kw . As the energy need in the hills is in kilowatt, and not in megawatt, villagers took the initiative to generate electricity. As an incentive, a subsidy of between 50-74 per cent is given, depending on the remoteness of the project location, for installation on the cost of electri